In October 1999 an international mission organization, Serving in Mission or for short SIM seconded one of their missionaries to the Living Word Family Church and so Linda arrived in Namibia.
Shortly after arriving in Grootfontein, she identified a need amongst the children of Blikkiesdorp and Linda’s Soup Kitchen was started.
But let Linda rather tell the story . . .
“Shortly after I arrived in Namibia during October of 1999, I started the soup kitchen in Blikkiesdorp.
The first Soup Kitchen serving was from the back of by 1400 Nissan truck. During those years I prepared the food myself and served it myself. I remember stopping in one of the streets in Blikkiesdorp (An informal settlement) on the edge of town. One family send their 4 children. I scooped some soup and handed them the bowl with bread. The kids tasted it and then turned towards some other kids standing at a distance and said “NAWA” meaning GOOD! That first day 44 children were served. Over years the Soup Kitchen steadily grew.
Now 20 years later the Soup Kitchen serves over 1300 children per day. The serving is now at the school situated in Blikkiesdorp. We serve the kids 5 days a week one meal during the fist break. The school kids total around 1200 per day. After the kids of the school return to class the school gate is opened and the the pre-school kids enter and we serve them. They can by anywhere from 100-250 children. Today our menu consist of 2 days “Sweet Pap” Maize Meal porridge with butter (Rama) and sugar. The remaining days we serve Pap with a stew. The stew is a Soya based gravy with game meat added to the pot. Any seasonal vegetables is also added.
Over years I have build a relationship with the kids. Those who were served in the beginning years are now young adult in their 30’ts. Often I will be in a store and someone will say…

“hallo antie, are you still serving the kids? I was one of your kids”

We need your support

Get in touch – email us

We need your prayers 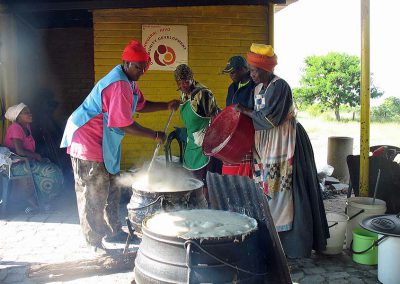 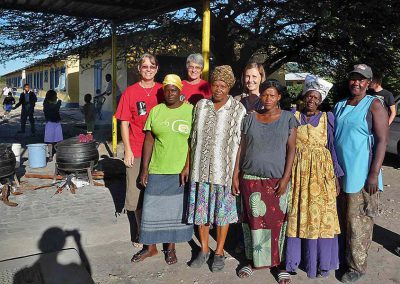 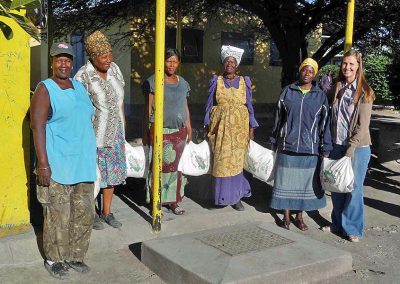 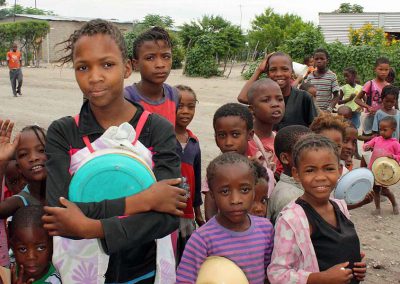 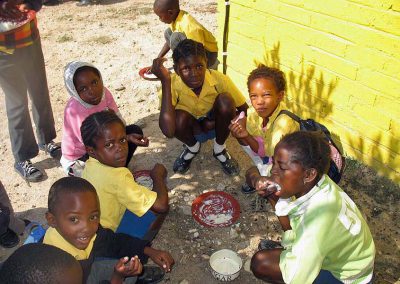 Your prayers and contributions matters!